A story about a good man from Samaria

A teacher of God's stood up. He wanted to see how Jesus would answer his question. So he asked Jesus, ‘Teacher, what must I do so that I can live with God for ever?’

‘What does God's Law say?’ Jesus asked. ‘What do you understand when you read it?’

‘You have told me the right answer,’ Jesus said. ‘If you do this, you will have true life with God.’

But the man wanted to show that he had been right to ask a question. So he asked, ‘Who are the people near to me that I must love?’

Jesus answered him by telling a story: ‘A man was going down the road from Jerusalem to Jericho town. On the way, some men attacked him. They took away all his clothes and they hit him with sticks. He was almost dead when they left him.  But it happened that a of was going down that road. He saw the man, who was lying there. But he walked past him on the other side of the road.  A was also going down the road. He came to the place where the man was lying. He saw him. But he also walked past on the other side of the road.

But then a man from Samaria was also travelling along the road. And he came to the place where the man was lying. When he saw him, he felt very sorry for him.  He went across to him. He poured and on the places where he was bleeding. Then he tied those places with clean cloths. After that, he put the man on his own to carry him. They arrived at a small hotel. He took the man in there and he was kind to him.

The next day, the man from Samaria took out two coins from his purse. He gave the money to the man that was taking care of the hotel. “Be kind to this man for me,” he said. “This money may not be enough. When I return, I will pay you for any more that you have spent on him.” ’

Then Jesus asked the teacher of God's a question. He said, ‘Three men saw the man that was lying on the road. Which of them showed love to him, like a real friend?’

The teacher answered, ‘It was the man who was kind to him.’

Then Jesus said to him, ‘Yes. So you should go and do the same for other people.’

Jews hated and scorned their neighbours in Samaria. So this incredible story, whose hero is a Samaritan, would have made a huge impression on the audience. Jesus told it to show to his Jewish hearers their prejudice, and to broaden their idea of who their neighbour was. It is anyone we meet who is in need. The religious authorities, like the priest and the Levite, are too involved in their own little religious world and ritual purity to care for this poor man who is lying half-dead in the road. 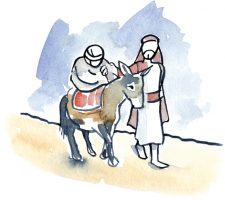 They pass by on the other side, as some religious people do today. But the Samaritan sees the need, is filled with compassion, and looks after the man at great personal cost. That’s how citizens of God’s kingdom are meant to behave.

But there is another meaning here. Perhaps we are to see Jesus himself as ‘the good Samaritan’. He was scorned by the religious leaders but full of compassion for broken people.

He sees our need and, at great personal cost (eventually, it took him to the cross), offers us rescue and healing. These are things we could never get from dead religion! What a story! And actually, it is true.